Life has a way of slipping by, doesn’t it? When I realized almost a year had passed since my last blog post, I knew it was time to drop in and share what God’s been doing lately. And man, has He been busy! Here’s just a sampling…

In the early part of 2013, I went through what I called a season of sacrifice. God had asked me to lay down my writing for a season, to honor Him by knowing Him more and pouring my heart into my family. It was a beautiful, weightless season that grounded me and strengthened my faith.

Then shortly after, I announced to my Facebook friends that I’d signed my first fiction contract–a novella project with three other authors that was to release with B&H Publishing in October 2015. One month later, I learned that B&H was closing their fiction line and the novella project was off the table.

All this time, a new story had embedded itself deeper in my heart and mind, and I felt a distinct pressing from God to start writing again. I had a few Moses moments and said, “Are You sure, God?” To which He said, “Go.” 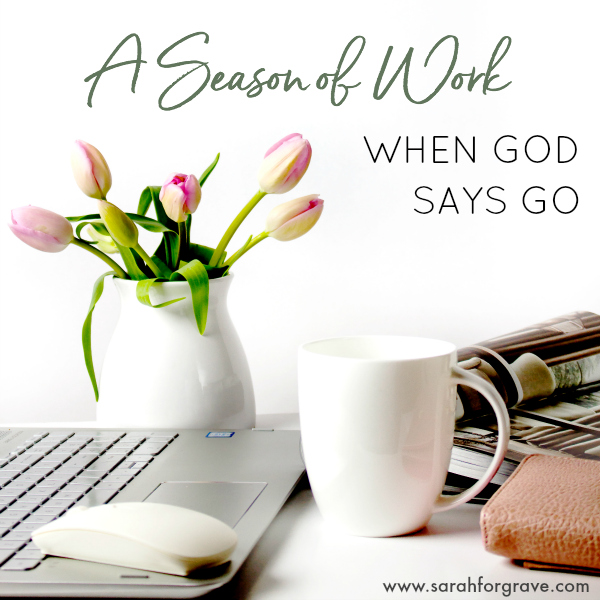 So here I am, back to juggling writing and motherhood and life in general. Let’s just say there are moments when I ask, “Can’t You call me back to a season of sacrifice? It was sooo much easier focusing on You and my family.”

But just like God led the Israelites through the desert–His cloud and pillar of fire telling them to sit still at times and then move at others–the same is true for me. I don’t necessarily know where I’ll end up, but I’m trusting that He knows. And in the meantime, He’ll provide enough manna and quail to sustain me. (Or a personal chef and housekeeper would suffice.) 🙂

So that’s where I am, friends. Still doing my best at this thing called life.

No matter what season you find yourself in, I pray this post finds you in the center of God’s will, breathing in His deep and lasting joy.

Previous Post: « A Season of Sacrifice: When God Asks You to Set Aside a Dream
Next Post: A Cup of Christmas Cheer Is Here! »