This is one of the most difficult blog posts I’ve written to date. In fact, I’ve started and stopped it at least a dozen times. Typed until my fingers were sore and then erased huge chunks of text.

How does one summarize a decision that has been whispering for a while and only recently found its full voice?

The gist is this: The Lord has asked me to put writing on the back burner for a season.

There are many factors involved, the main one being I’m the mama of two young children–one of whom will be entering the world of kindergarten in August. That’s six months away.

Pardon me while I hyperventilate.

I’ve heard so many people tell me these years are precious, to invest in my children now because once school starts, I’m releasing them to the big, wide world. (Thank you, Erin MacPherson.)

But the truth is I haven’t always done this as fully as I should. Too many times I’ve allowed my heart and emotions to become divided between my family and the pursuit of publication. All of this to the detriment of what’s most important. 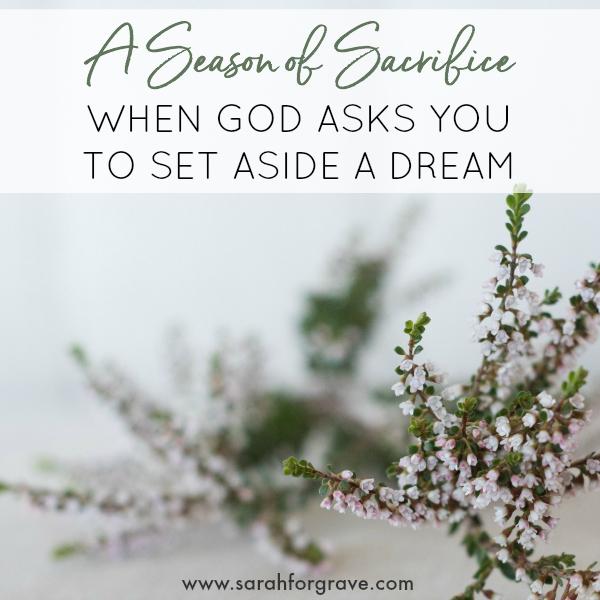 Let’s back up to give some context. (Be forewarned I’m going to have a rare preacherlike moment, but I feel led to share it, so there ya go.)

Six months ago began a journey of spiritual restlessness for me. It’s like something clicked inside and I realized I didn’t want to keep paying lip service to my faith. I wanted to live it out in a deep and authentic way. And this wasn’t just a nice little nudge from God….It was an all-consuming urgency, propelling me to crave more of Him and to seek His true will for my life (as opposed to what I thought His will should be).

And let me be honest. This restlessness scared me like crazy, because past history has shown that whenever God draws me to Him like this, something big (and not always what I view as good) is coming.

As I searched and prayed about where this restlessness was taking me, I started to hone in on a sobering truth. If someone would ask me what my top priorities were in life, I would say: God first, family second, and writing and other interests next. But the way I was spending my time–not to mention my mental and emotional energy–was in the exact opposite order.

Something was wrong with this picture.

Somewhere along the way I had allowed my writing to inch its way to the top of my focus, taking away precious time from my family and my Savior (who incidentally gave me the gift of writing in the first place). Sure, I had surrendered things along the way, but as this restlessness grew, I knew God was asking something bigger of me.

He was asking me to sacrifice.

How many of you remember the story of Abraham and Isaac in the Bible? Remember how Abraham carted Isaac up the mountain, strapped him to an altar, and prepared to sacrifice him to the Lord? This was his chosen son! The one through whom God had promised to number his descendents as numerous as the stars in the sky.

And yet God had a test for Abraham. It was like He said, “I know I’ve given you this miracle son, but exactly how much does he mean to you?”

In the end, we know that God provided a ram to take Isaac’s place. But before that point, Abraham proved his faith by obeying God, even to the point of risking the loss of something extremely valuable.

Now I’m not trying to get all spiritual-giant on you and make it sound like I’m sacrificing something that equals Abraham’s father-of-the-nations sacrifice. But God did use that story to remind me that no matter what He asks of me in this particular season, He loves me and will provide.

And the truth is, while a step like this would have freaked me out a year ago, I have absolute peace that it’s the right decision.

I do plan to keep my writing juices flowing whenever God gives me windows of time, and story ideas are still bursting in my mind and begging to be told. So I’ll seek His guidance each day and use whatever time He gives me.

Please know that I cherish all of you and can’t wait to see God’s purpose lived out in each of our lives as we serve Him!

Previous Post: « Meet and Greet with Author Michelle Ule
Next Post: A Season of Work: When God Says Go »