As a fitness instructor, I often use the term “productive pain” to describe what we feel the day after a hard workout.

One scientific theory for soreness says that small muscle tears are the reason for the pain. When we do strength training, the tiny fibers in our muscles tear and then rebuild stronger than before.

This term has taken on a whole new meaning for me this week. 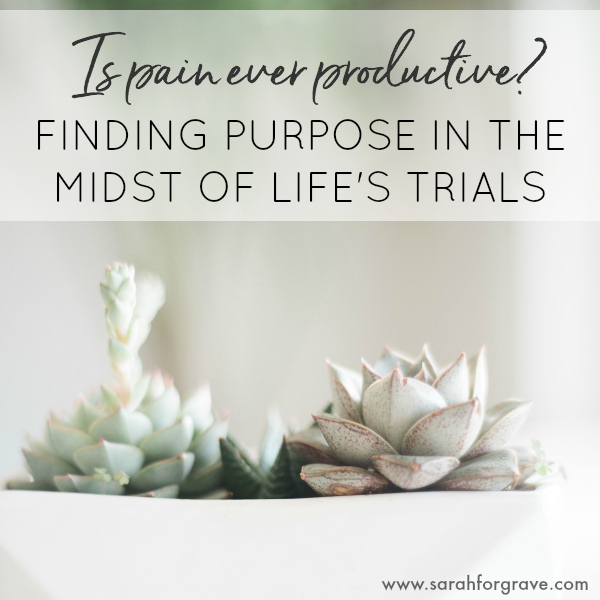 If you saw my post a couple weeks ago about struggling to trust God, you know some of the life challenges I’ve faced recently. The funny thing is, I had just started to find my footing and was prepared to blog about it…when another storm blew in last week.

My family was preparing for summer break to end and school to start. Frankly I was looking forward to this transition because my writing career often takes a backseat with the kids home, and my to-do list was piling up.

Five days before the start of school, my son started waking up at night, whimpering and complaining that his jaw hurt. I did some research and learned that he was due to get new molars at this age, so I assumed that was the cause, gave him Ibuprofen, and sent him to bed.

The Ibuprofen seemed to manage his pain, so we continued with it, hoping the new teeth would come in soon and give him relief.

But things got worse in a hurry.

The day before school, I had planned to take him on a lunch date–our last opportunity to do something fun together. So I took my daughter to grandma’s house and let my son choose our lunch location.

He seemed a little more sluggish than usual, but I kept an eye on him and just kept praying the pain would go away soon. I scheduled an appointment with our dentist for that afternoon, just to have it looked at and verify that the molar was coming in like we suspected.

In the meantime, my son chose one of his favorite restaurants for lunch, but I got worried when he didn’t eat anything, only drank a little bit of his juice.

We went to his dentist appointment, had him looked at (as much as he would allow the dentist to see), got an antibiotic prescription, and went home. He had a barely visible amount of swelling in his jaw at that point. Nothing to cause concern. I felt hopeful that the antibiotic would help.

When he woke up the next morning, the swelling had gotten alarmingly worse. He was barely talking or eating, and I knew there was no way he would make it to his first day of school.

I called a pediatric dentist, who took X-rays and found that my son’s new molar was decayed and caused a breeding ground for infection to grow. (We’re still not sure how the new tooth had decayed, but that’s another topic for another day.)

The dentist upped our antibiotic dose and pulled me aside to explain the gravity of the situation. My son would need a root canal at best, but in the meantime, if his swelling worsened or especially spread to the neck, I needed to take him straight to the ER. Swelling in that region could block off his air passage, which could lead to the obvious frightening conclusion.

I swallowed my emotion and tried to keep track of all the instructions, then took my son home to hang out with grandma while I filled his prescription.

When I got back from the pharmacy one hour later, the swelling had grown even more. My son hadn’t eaten or talked all day, and he was starting to drool because it hurt too much to swallow.

I took a picture of him, sent it to my sister-in-law who used to work as a pediatric nurse, and she told me to take him straight to the children’s hospital 30 minutes away. She said not to bother taking him to a closer ER because they would transport him anyway.

With tears choking my throat, I scrambled to pull together what I could, trying to think of what I might need if this turned into an overnight stay or longer.

Grandma ensured my daughter would be well taken care of, so I turned my van in the direction of the hospital, praying the whole time and checking my son to make sure he was doing okay.

The ER at the children’s hospital didn’t mess around. As soon as I checked in and signed the form, a nurse took us back immediately. Within ten minutes, two doctors had come to our room. A CT scan was ordered along with IV antibiotics. 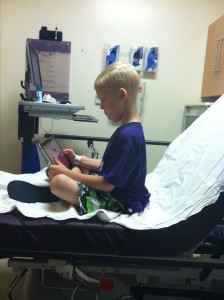 Hanging out in the ER. The iPad was a great distraction!

The CT scan showed what they suspected. An abscess–or pocket of infection–had developed from the tooth and had grown to an alarming size in his cheek and jaw. (Apparently it’s common for these infections to stay hidden for a long time and grow serious in a hurry.)

An oral surgeon was called in. She told us our son would go into surgery as soon as possible because of the danger of the infection spreading to his air passage.

All this time, I was in survival mode, trying to process how things could change so quickly and also trying to be there for my anxiety-prone son.

As we went through the surgery process in the middle of the night, then the recovery, and I saw my son struggle and cry and even admit he wished he weren’t alive, I couldn’t help but think about my own struggles and frustration with God. How pain clouded my vision and choked my trust.

And yet, as I filled the role of mother to my son, stroking his arms and forehead, crooning that he would be okay, I got a glimpse of my Heavenly Father doing those same things for me.

I couldn’t take the pain from my son–oh, how I wished I could!–but I could reassure him I was there. The phrases I used to encourage him were ironically the very things I needed to hear myself.

“Sometimes things have to get worse before they get better.”

“In a month, you’ll be back to normal and all of this will be a memory.”

“God’s watching over you. You can talk to Him anytime.”

Did I want to see my son go into emergency surgery? Did I want to see him in the ICU with a breathing tube and then struggle to cope with his new reality as he became aware of his surroundings?

But it was the only way to save his life.

As I return home and face the other trials awaiting me, their power dims when I remember this truth…

I might struggle to see God’s vision, and life’s circumstances may seem downright cruel sometimes–but slowly, surely He will use these things for good. Maybe to grow something in me, maybe to protect me from something worse, or maybe to strengthen my spiritual muscles.

But always to give me life.

Productive pain in its truest form. 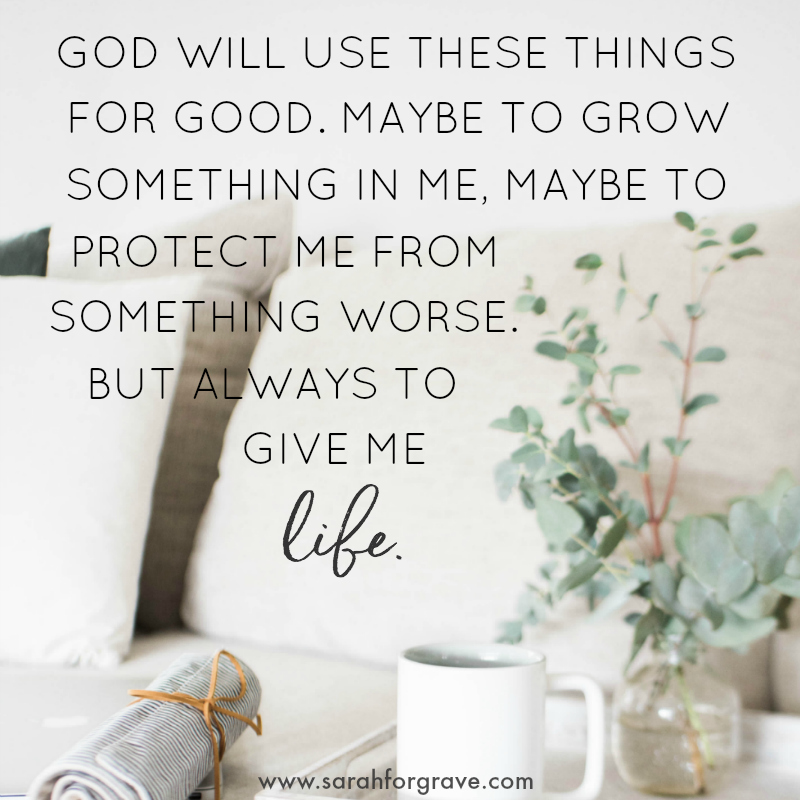 Previous Post: « The Energy Difference: How Cleaning Up Your Diet Changes More Than the Scale
Next Post: How to Stay Healthy While Caring for Someone Else »